A love for experimenting and trying new things 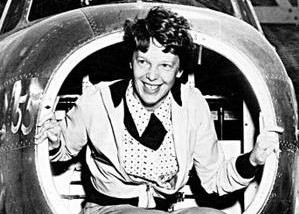 She gave us a big clue when she named her plane the “Flying Laboratory” but Amelia Earhart was also pretty outspoken about her love for experimenting so she could always be trying new things. I, too, had a similar passion but as I got older and became more ingrained in Corporate America, I started to bring out those qualities less and less. My career was all about strategizing, planning, executing and hitting the numbers… there wasn’t a lot of room for experimenting and trying new things. But in hindsight, there shouldn’t have been room for shareholders to invest in high cost, multi-year initiatives that were based in several untested assumptions, most of which weren’t accurate or the circumstances had changed over the course of the projects such that those assumptions were no longer true. I can only imagine the millions upon millions of dollars that could have been saved with just a little more infusion of entrepreneurial principles that would have encouraged more testing and learning to validate those key assumptions before making such huge investments.

My mindset shifted around 2013 when I learned about a concept that GE had started to embrace called “FastWorks” which is based upon lean entrepreneurial principles advocated by Eric Ries in his book The Lean Startup. I should have connected the dots earlier being a startup founder myself with Slimpressions®, but I worked so diligently to keep my corporate world and startup life separate that I simply couldn’t fathom how a big corporation could appreciate, adopt and benefit from the basic approaches I'd been utilizing as a bootstrapped entrepreneur. I’m glad someone had the courage to challenge the status quo at GE with FastWorks. That awakened me to something very impactful that was right in front of me all along.

I’ve since become a huge advocate for intrapreneurship... bringing entrepreneurial principles, mindsets and behaviors into the corporate world. I particularly love working with growth-focused middle market firms (~$50MM - $2B revenues) who have the vision, commitment and agility to accelerate growth by embracing their startup roots. Those approaches are now the cornerstones from which I coach executives and functional leaders, how I advise organizations in growth strategies and change leadership, and how I engage teams with innovative and engaging experiential workshops.

And infusing my coaching, advising and leading with all those entrepreneurial principles makes it a whole lot more fun than doing those things the old traditional way!

Amelia thought so as well…

“Flying might not be all plain sailing, but the fun of it is worth the price.”

Stay tuned for more leadership lessons we can all learn and embrace from Amelia Earhart.